For someone who works in the Toronto financial district like myself, The Carbon Bar is perfectly located.  It is a few minutes walk from The Toronto Eaton’s Centre, at the major intersection of Queen Street East and Church Street.  Beyond the reception area, diners are greeted by a warehouse-themed massive dining room with extremely tall ceilings and funky light fixtures.  Sister company of Nota Bene, TCB’s chef David Lee’s impressive resume also includes another one of Toronto’s well-known restaurant, Splendido on Harbord Street.  Of Asian descent, Lee’s creations often reflect his background, with an added fusion twist.

I enjoyed the openness of the dining room, where noise levels are kept well under control.  I found that the food was average, although a couple of dishes were made with ‘out-of-the-box’ thinking, which was quite delightful.  The way that they organized the wine list was smart, with wines neatly categorized under $39, $59, and $79.  However, if I have to pin-point, location is probably one of the main reasons of why I would return.  Worthy of mentioning is that TCB’s washrooms are modern, roomy and clean.  This is pretty hard to come by for a downtown restaurant, unfortunately!

$14 Hamachi tartare, clementine, pear, coriander, kombucha vinegar ~ Light and refreshing, this appetizer (and apparently most of TCB’s dishes) is ideal for sharing.  On the side, the little red balloons were actually tiny red peppers.  Not overly spicy, the pepper was flavorful, and definitely stole some spot light from the hamachi.

$7 Crisp Chicken Skin & Sweet Chili Vinegar ~ Sometimes when I order deep fried chicken skin from other restaurants such as a Japanese izakaya, the most often cause of disappointment would be the skin not being crispy enough.  Well this version of the dish is certainly not the case.  Crunchy and light, one would easily be fooled and forget about the calories overload.  I think this is delicious. 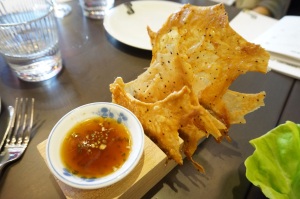 $11 “Hot Mess” ~ Sweet potato, cheese curds, crema, pickled jalapeño, chopped brisket ~ This is an interesting deviation from a traditional baked potato.  I like the taste of fresh cilantro, combined with a nicely baked creamy sweet potato.

$16 Poached White Asparagus & Sea Scallop ~ Considering the price, I would certainly expect more than one scallop.  Although the scallop was quite flavorful, but to add extras, each would come at a hefty price of $6.75.  The asparagus were soft and juicy, yet not soggy.

$12 Beef Brisket Burnt Ends, lettuce wrap, pickled cucumber, coleslaw, chili ~ I find that this was too salty.  On one hand I do agree that beef briskets need to be soft and flavorful, but I don’t think it is right to saturate the poor pieces of meat in salt and soy sauce.  I didn’t enjoy this dish at all, thank God for the lettuce leaves.

$24 Blackened Sea Bass, yuca, chili, lime, coriander, tomatillo chutney ~ It’s probably decent, but unremarkable to a point where I forgot what the taste was like.

1.  Reduce salt and soy sauce for the beef brisket