As a customer of DT Bistro (Dessert Trends Bistro & Patisserie) for many years, I can certainly attest to the quality of their food.  They had an extensive renovation a couple of years ago which separated the restaurant into a retail section for their desserts, and a dining area.  Apart from old and prestigious establishments such as Splendido, the food scene on Harbord Street and vicinity is getting increasingly fierce as strong new competitors like THR & Co., etc. emerged.

During summertime, sitting in their dining room can be a bit uncomfortable.  As all the floor-to-ceiling windows are usually wide-opened, there never seemed to be enough air-conditioning.  The amount of flies that flew indoor was a particular nuisance to me, but I guess the same can be said about eating out on any patio.

The intention of my visit this time was to try out their afternoon tea-set for $28 per person (minimum of two orders per table).  Portions were generous so I did not even feel the need for dinner after this meal (arrived around 3pm).  Although the restaurant’s atmosphere was not nearly as comfortable as a five-star hotel, food quality was certainly comparable, especially if one takes pricing into consideration.

The tea-set already includes a pot of tea, to be shared amongst two people.  On the regular menu, a pot of tea for one person is $3, and for two people is $5.  For this price, I wasn’t surprised to see two tea bags in the pot instead of real tea leaves.  The Ceylon tea that I picked was not aromatic at all; guess I should have gone with my usual, Earl Grey tea.

Apart from the goodies on the three-tiered plates stand, there was also a choice of an appetizer of either a spring roll or a soup; I chose the mushroom soup.  Although not a common item to be served at a traditional English afternoon tea, it was delicious nonetheless, with a faint whiff of coconut oil.

I liked the fact that there were proportionate savory vs. sweet items.  On the bottom plate: onion rolls, pear & melted brie sandwiches, and smoked salmon croissants.  Too bad I didn’t eat them right away so the pear & brie sandwiches became a bit dry.

The highlight for me – freshly baked scones.  Deadly in terms of calories but I simply could not resist.  The scones also came with lemon curd, but I prefer to have mine the traditional way, with jam and clotted cream. 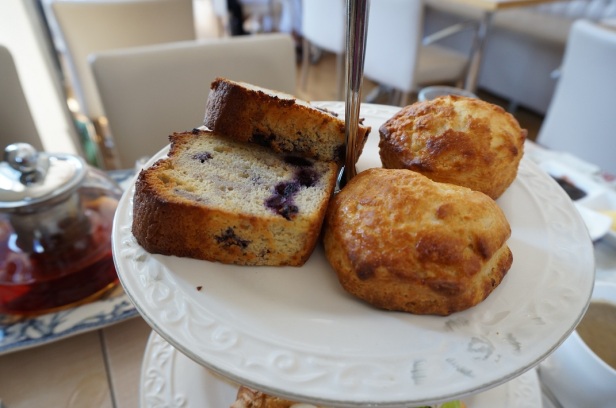 Top layer was filled with decadent desserts.  The opera cake was moist and melt-in-your-mouth. 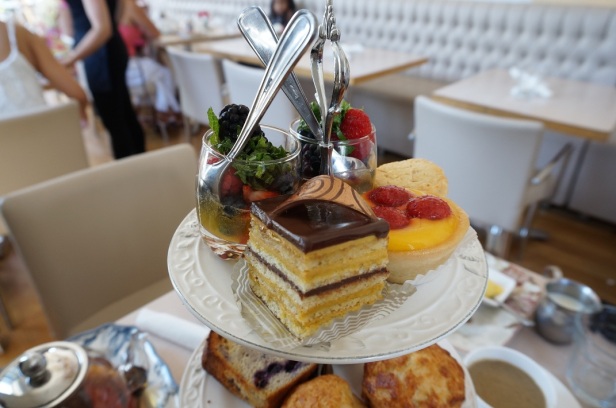 Lemon Ricotta Shrimp Crêpes w/ asparagus, sauteed onions ($17) ~ Apart from the tea-set for two, our party of four also ordered 2 dishes from the brunch menu to share.  The crêpe was overcooked to a point where it became hard and crunchy.  The onions and asparagus were similar to a Chinese stir-fry.  The weakest link……

Soft-shell crab sandwich ($17) ~ This dish was a seasonal item, which means it comes and goes on the menu.  There were two fresh, crunchy and scrumptious deep-fried soft-shell crabs in the bun.  The pickled beet root made the whole sandwich taste less oily – excellent! 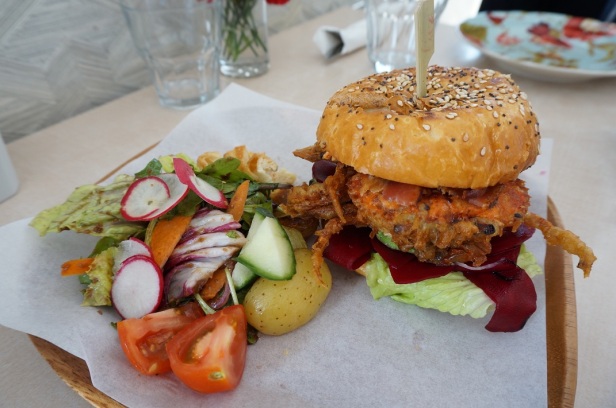 We had to pay our bill out in the retail area as there was only one credit card terminal.  We experienced a bit of a wait because the customers ahead of us were carefully selecting their desserts.  The frustration was lessened when Chef Don gave us samples of his house-made flavourful durian ice cream, which he emphasized was healthy, with no added preservatives, hence only good for a couple of weeks in the freezer.

1.  Improve on the flies situation as they were very intrusive to an otherwise good dining experience.

2.  Get more portable credit card terminals so customers do not have to wait in line in order to pay.